Dr Clayton is recognised as a leading UK expert in the management of atopic eczema/dermatitis.  He was recently invited to give an update on the new treatments for eczema at the PCDS training day and had also given presentations at the British Association of  Dermatologists and the Royal College of Physicians in London. 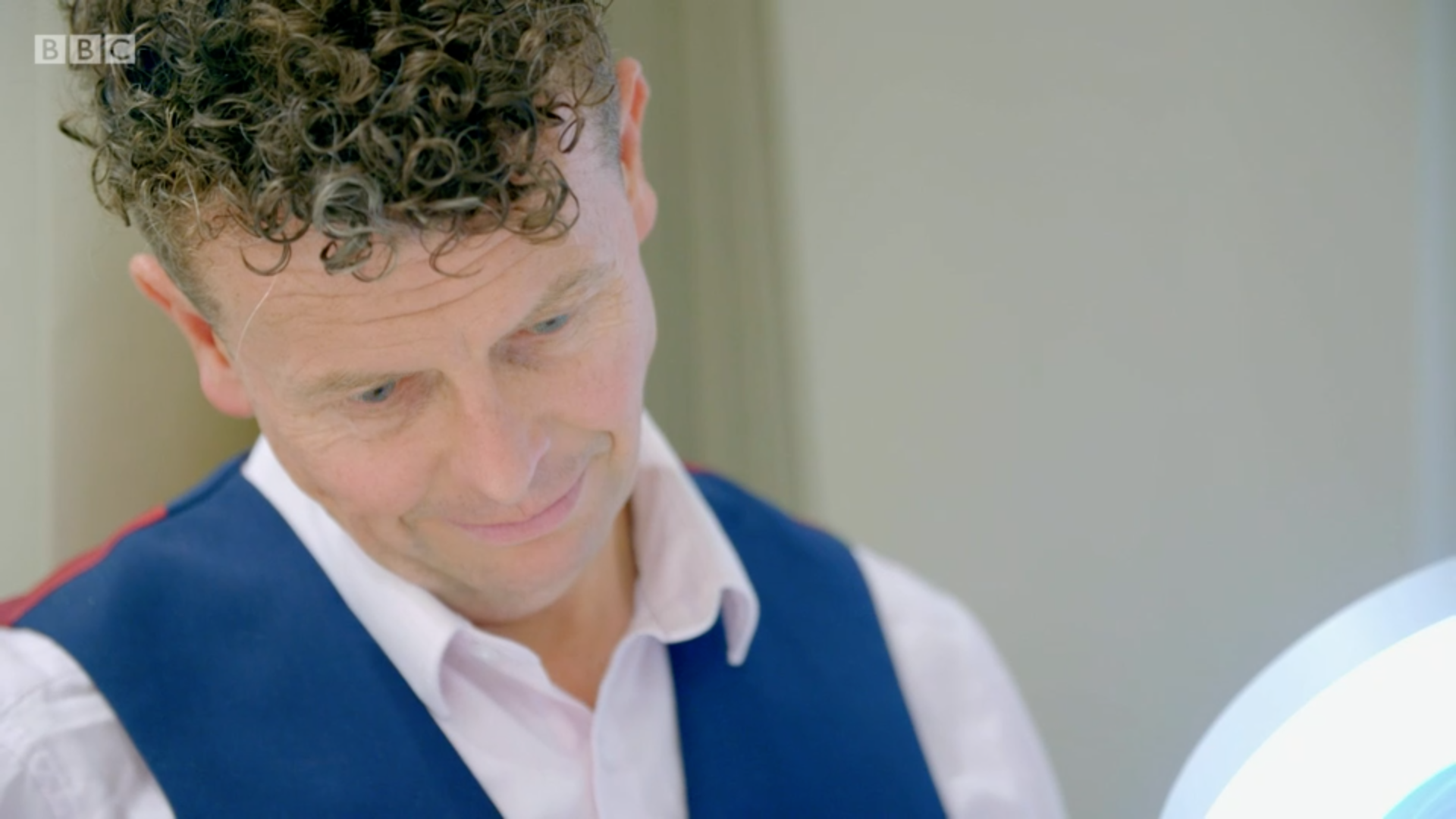 Dr Clayton also works closely with the national eczema society and regularly runs training days in Manchester for healthcare professionals caring for children and adults with atopic eczema.
Atopic eczema is a very common inflammatory condition of the skin. The term atopic is used to describe conditions such as eczema, asthma, seasonal rhinitis and hay fever, which often have a genetic basis. Eczema is the term used to describe changes in the upper layer of the skin that include redness, blistering, oozing, crusting, scaling, thickening and sometimes pigmentation (although not all of these changes will necessarily occur together). The words eczema and dermatitis are interchangeable and mean the same thing: thus atopic eczema is the same as atopic dermatitis.
Atopic eczema affects both sexes equally and usually starts in the first few weeks or months of life, but can present at any age.
He is currently undertaking several research studies including 2 trials looking at IL31 blockade and IL4 receptor blockade for the treatment of severe eczema.
Whilst undertaking a fellowship in paediatric dermatology in Dublin, Dr Clayton was involved in a pivotal study that confirmed the strong association between mutations in the filaggrin gene and atopic dermatitis. 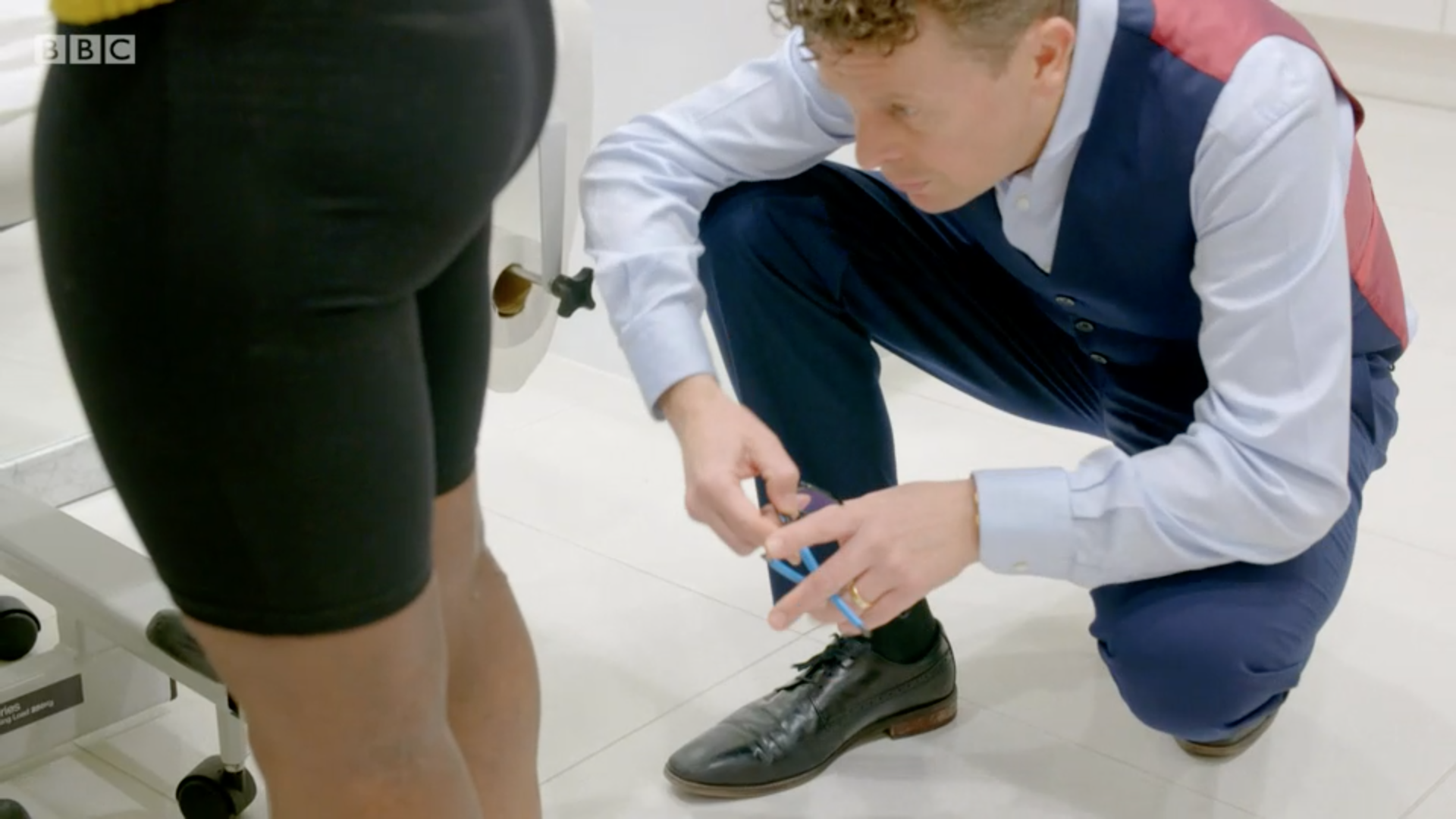 He has also been a principal investigator in a large international study looking at the genes which cause eczema in particular filaggrin.

Tim's daughter Emily has created this little animation to help understand eczema. Having gaps between the skin cells allows irritants like water, infection and allergens to enter the skin and stimulate the immune system. This brings blood vessels and T and B cells to the skin which release chemicals that can make the skin itchy. The process then loops and repeats.

Tim has recently created this eczema information sheet for parents. Click on the pictures below to enlarge and then print. 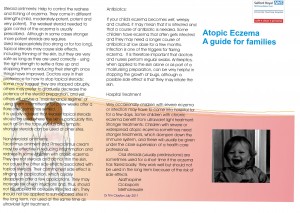 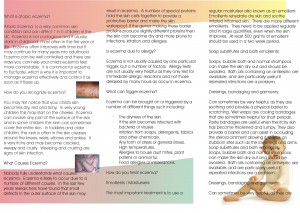 Atopic Eczema is most common in childhood, affecting one in five infants at some stage.

It usually disappears during childhood, although it can carry on into adult life or come back in the teenage or early adult years . It may occasionally develop for the first time in adulthood. It affects 1 in 20 adults.

At present the underlying cause for eczema is not understood. There has been vast amounts of research in this area over the last 25 years and several theories have been put forward.
Eczema is likely to be due to a number of factors including;

1. Genetic factors : The importance of genetic factors is underlined by the finding that a positive parental history is the strongest risk factor for eczema. Studies have shown that parental eczema confers a higher risk of eczema to offspring than parental asthma or allergic rhinitis. These findings suggest the existence of specific genes for eczema, rather than or in addition to atopic genes.

2. Environmental factors : There are a number of theories around the relevant environmental influences such as increasing exposure to allergens such as the house dust mite and reduced exposure to childhood infection having an effect on delayed “maturation” of the immune system, but this question remains of great interest and is un-resolved.

Reecent work published by experts on genetic skin disorders at the University of Dundee, with collaborators in Dublin, Glasgow, Seattle and Copenhagen, have discovered the gene that causes dry,scaly skin and predisposes individuals to atopic dermatitis (“eczema”) in a large percentage of the European population. Some of these individuals also develop a form of asthma that occurs in association with atopic dermatitis. This work has been published in two consecutive papers in the March and April editions of the top genetics journal, Nature Genetics.

The gene in question produces a protein called filaggrin which is normally found in large quantities in the outermost layers of the skin. This protein is essential for skin barrier function, helping to form a protective layer at the surface of the skin that keeps water in and keeps foreign organisms out.

In eczema this barrier is found to be abnormal due to a lack of the protein filaggrin.

and this can make the skin prone to further insult from irritants such as water, resulting in inflammation and a flare of eczema.

The inflammation is also regulated by specific genes

What are the symptoms of atopic eczema?

The main symptom is itch. Scratching in response to itch may be the cause for many of the changes seen on the skin. Itching can be bad enough to interfere with sleep, causing tiredness and irritability.

Atopic eczema can affect any part of the skin, including the face, but the areas most commonly affected are the bends of the elbows and knees, and around the wrists and neck (a flexural pattern). Other common appearances of atopic eczema include discrete coin-sized areas of inflammation (a discoid pattern), and numerous small bumps that coincide with the hair follicles (a follicular pattern).
If you have eczema, it is likely your skin will be red and dry, and scratch marks (and bleeding) are common. When the eczema is very active (during a ‘flare-up’) you may develop small water blisters on the hands and feet, or the affected areas of your skin may become moist and weepy. In areas that are repeatedly scratched, the skin may thicken up (a process known as lichenification), and become even more itchy.

What makes atopic eczema flare up?

Many factors in a person’s environment can make eczema worse. (see above diagram)
These include heat, dust and contact with irritants such as soap or detergents Being unwell: for example having a common cold can make eczema flare Infections with bacteria or viruses can make eczema worse. Bacterial infection (usually with a bug called Staphylococcus) makes the affected skin yellow, crusty and inflamed, and may need treatment with antibiotics.

How is atopic eczema diagnosed?

It is usually easy for health care professionals, such as health visitors, practice nurses and general practitioners, to diagnose eczema when they look at the skin.

However, sometimes the pattern of eczema in older children and adults is different, and the help of a hospital specialist may be needed. Blood tests and skin tests are usually not necessary. Occasionally the skin may need to be swabbed (by rubbing a sterile cotton bud on it) to check for bacterial or viral infections.

Can atopic eczema be cured?

No, it cannot be cured, but there are many ways of controlling it. Most children with atopic eczema improve as they get older (75% clear by their teens). However, many of those who have had eczema continue to have dry skin and need to avoid irritants such as soaps or bubble baths. Eczema may persist in adults, but it should be controllable with the right treatment. Atopic eczema may be troublesome for people in certain jobs that bring them into contact with irritant materials, such as catering, hairdressing or nursing.

How can atopic eczema be treated?

You will need the advice of a health care professional on the best treatment for your eczema and on how long this should continue. The regime used most often in the treatment of atopic eczema consists of moisturisers and topical steroids.

These should be applied every day to help the outer layer of your skin function as a barrier to your environment. The dryer your skin, the more frequently should you apply a moisturiser. Many different ones are available, varying in their degree of greasiness, and it is important that you choose one you like to use.

A moisturiser in your bath or shower is a good idea. Moisturisers containing an antiseptic are available, and are particularly useful if repeated infections are a problem.

These will usually settle the redness and itching of your eczema when it is active. They come in different strengths (mild, moderately-potent, potent and very potent), and your doctor will advise you on which type needs to be used where, and for how long. Used inappropriately (too strong or for too long), topical steroids may cause side effects, including thinning of the skin, but they are very safe as long as they are used correctly – using the right strength to settle a flare up and stopping them or reducing their strength once things have improved.

If your eczema becomes wet, weepy and crusted, it may mean that it is infected and that a course of antibiotic is needed. Antiseptics, when applied to the skin alone or as part of a moisturising preparation, can be very helpful in stopping the growth of bugs, although a possible side effect is that they may irritate the skin.

Some people with atopic eczema find the relatively new calcineurin inhibitors, tacrolimus ointment and pimecrolimus cream, effective in reducing the inflammation of their skin.

They are not steroids and thus do not thin the skin, nor cause the other side effects associated with topical steroids. Their commonest side effect is stinging on application, which quickly disappears. They may increase risk of skin infections and, thus, should not be applied to obviously infected skin.

Theoretically at least, they might increase the risk of skin cancer, and therefore should not be applied to sun-exposed sites in the long term, nor used at the same time as ultraviolet light treatment. Antihistamines. Your doctor may recommend antihistamine tablets, which in certain patients can be helpful.

Antihistamines that make people sleepy (such as chlorphenamine and hydroxyzine) may help the itch of atopic eczema, although they are less effective if used in the long term. Bandaging (dressings). The use of medicated paste bandages can sometimes be very helpful, as they are soothing and provide a physical barrier to scratching. ‘Wet wraps’ are cooling bandages that are sometimes helpful for short periods. If the skin is infected, appropriate treatment is necessary if dressings are being considered. Your doctor or nurse will advise you regarding the suitability of dressings. Ultraviolet light.

Some people with chronic eczema benefit from ultraviolet light treatment, which is usually given in a specialist hospital department and supervised by a dermatologist (see British Association of Dermatologists’ patient information leaflet on Phototherapy). Stronger treatments. People with severe or widespread atopic eczema sometimes need stronger treatments, which dampen down the immune system, and these will usually be given under the close supervision of a health care professional. Oral steroids (usually prednisolone) are sometimes used for a short time if the eczema has flared badly: they work well but should not be used in the long term because of the risk of side effects.

Other treatments include using drugs like Azathioprine, Ciclosporin,Methotrexate and the newer biologic agents.